The Murder of James "Stompie" Seipei 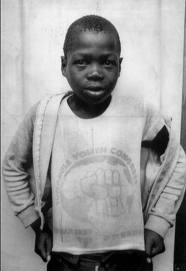 James Seipei (1974–1988), also known as Stompie Moeketsi, was a teenage African National Congress (ANC) activist from Parys in South Africa. He was kidnapped and murdered on 29 December 1988 by members of Winnie Mandela's bodyguards, known as the Mandela United football club. 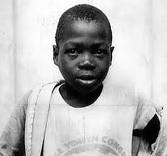 Moeketsi joined the street uprising against apartheid in the mid 1980s at age ten, and soon took on a leading role. He became the country's youngest political detainee when he spent his 12th birthday in jail without trial. At the age of 13 he was expelled from school.
Moeketsi was kidnapped on 29 December 1988 after a school rally, accused of being a police informer and murdered at the age of 14. His body was found in Soweto with his throat slit. Jerry Richardson, one of Winnie Mandela's bodyguards, was convicted of the murder. 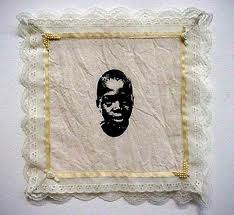 He claimed that she had ordered him to abduct four young men from Soweto, of whom Stompie was the youngest. The four were severely beaten and Stompie's body was later recovered by the police. 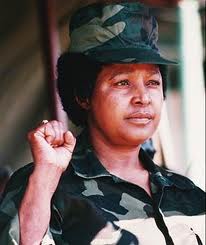 Winnie Madikizela-Mandela (born Nomzamo Winfreda Madikizelza; 26 September 1936) is a South AfricanAfrican National Congress Women's League. She is currently a member of the ANC's National Executive Committee. Although still married to Nelson Mandela at the time of his becoming president of South Africa in May 1994, she was never the first lady of South Africa, as the couple had separated two years earlier after it was revealed that Winnie had been unfaithful during Nelson's incarceration. Their divorce was finalized on 19 March 1996, with an unspecified out-of-court settlement. Winnie Mandela's attempt to obtain a settlement up to US$5 million, half of what she claimed her ex-husband was worth, was dismissed when she failed to appear at court for a financial settlement hearing.

A controversial activist, she is popular among her supporters, who refer to her as the 'Mother of the Nation', yet reviled by others, mostly due to her alleged involvement in several human rights abuses, including the 1989 kidnap of 14-year old ANC activist Stompie Moeketsi, who was later murdered.
In March 2009, the Independent Electoral Commission ruled that Winnie Mandela, who was selected as an ANC candidate, could run in the April 2009 general election, despite having a fraud conviction.
Early life

Her Xhosa name is Nomzamo. Nomzamo means "trial (having a hard time in life)". She was born in the village of eMbongweni, Bizana, in the Pondo region of what is now South Africa's Eastern Cape Province. She held a number of jobs in various parts of what was then the Bantustan of Transkei, including with the Transkei government, living at various times in Bizana, Shawbury and Johannesburg. 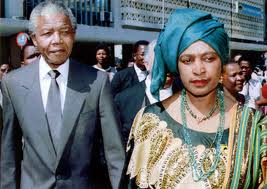 She met lawyer and anti-apartheid activist Nelson Mandela in 1957. They were married in 1958 and had two daughters, Zenani (also called Zeni) (b.1959) and Zindzi (b.1960). In June 2010, Winnie was treated for shock after the death of her great-granddaughter, Zenani, who was killed in a car accident on the eve of the opening of South Africa's World Cup. She has diabetes.

Despite restrictions on education of blacks during apartheid, Mandela earned a degree in social work from the Jan Hofmeyer School in Johannesburg, and several years later earned a Bachelor's degree in international relations from the University of Witwatersrand, also in Johannesburg. She is also a qualified Social Worker. 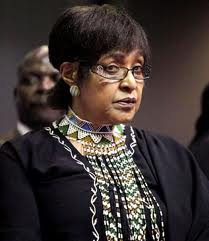 Mandela emerged as a leading opponent of the white minority rule government during the later years of her husband's long imprisonment (August 1963 – February 1990). For many of those years, she was exiled to the town of Brandfort in the Orange Free State and confined to the area, except for the times she was allowed to visit her husband at the prison on Robben Island. Beginning in 1969, she spent eighteen months in solitary confinement at Pretoria Central Prison.
During the 1980s as well as the early 1990s, she attracted immense national and international media attention and was interviewed by many foreign journalists as well as national journalists such as Jani Allan, then Leading Columnist of the South African Sunday Times.
In a leaked letter to Jacob Zuma in October 2008, just-resigned President of South Africa Thabo Mbeki alluded to the role the ANC created for her in the anti-apartheid activism:

In the context of the global struggle for the release of political prisoners in our country, our movement took a deliberate decision to profile Nelson Mandela as the representative personality of these prisoners, and therefore to use his personal political biography, including the persecution of his then wife, Winnie Mandela, dramatically to present to the world and the South African community the brutality of the apartheid system.

Violent rhetoric and murder allegations
Mandela's reputation was damaged by what many considered her sometimes bloodthirsty rhetoric, the most noteworthy example of this being a speech she gave in Munsieville on 13 April 1986, where she endorsed the practice of necklacing (burning people alive using tyres and petrol) in the struggle to end apartheid.
She said, "with our boxes of matches and our necklaces we shall liberate this country".

Further tarnishing her reputation were accusations by her bodyguard, Jerry Musivuzi Richardson, that Winnie Madikizela-Mandela ordered kidnapping and murder.On 29 December 1988, Richardson, coach of the Mandela United Football Club (MUFC) -- which acted as Mrs. Mandela's personal security detail-- abducted 14-year-old James Seipei (also known as Stompie Moeketsi) and three other youths from the home of Methodist minister Rev. Paul Verryn. Mrs. Mandela claimed that she had the youth taken to her home because she suspected the reverend was sexually abusing them. The four were beaten in order to get them to admit to sex with the reverend and Seipei was also accused of being an informer. Seipei's body was found in a field with stab wounds to the throat on 6 January 1989. This incident became a cause célèbre for the apartheid government. In 1991, she was convicted of kidnapping and being an accessory to assault in connection with the death of Seipei. Her six-year jail sentence was reduced to a fine on appeal.
The final report of the South African Truth and Reconciliation commission, issued in 1998, found "Ms Winnie Madikizela Mandela politically and morally accountable for the gross violations of human rights committed by the MUFC."

During South Africa's transition to democracy, she adopted a far less conciliatory attitude than her husband toward the dominant white community. Despite being on her husband's arm when he was released in 1990, the first time the two had been seen in public for nearly thirty years, the Mandelas' 38-year marriage ended when they separated in April 1992 after it was revealed that she had been unfaithful to Nelson during his imprisonment. The couple divorced in March 1996. She then adopted the surname Madikizela-Mandela. Appointed Deputy Minister of Arts, Culture, Science and Technology in the first post-Apartheid government (May 1994), she was dismissed eleven months later following allegations of corruption.
She remained popular among many ANC supporters, and, in December 1993 and April 1997, she was elected president of the ANC Women's League, though she withdrew her candidacy for ANC Deputy President at the movement's Mafikeng conference in December 1997. In 1997, she appeared before the Truth and Reconciliation Commission. Archbishop Desmond Tutu as chairman of the commission recognised her importance in the anti-apartheid struggle, but also begged her to apologize and to admit her mistakes. In a guarded response, she echoed his words, admitting that "things went horribly wrong". 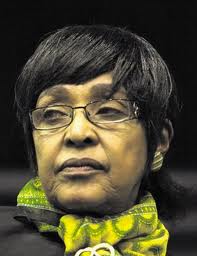 On 24 April 2003, she was found guilty on 43 counts of fraud and 25 of theft, and her broker, Addy Moolman, was convicted on 58 counts of fraud and 25 of theft. Both had pleaded not guilty to the charges, which related to money taken from loan applicants' accounts for a funeral fund, but from which the applicants did not benefit. Madikizela-Mandela was sentenced to five years in prison.

Shortly after the conviction, she resigned from all leadership positions in the ANC, including her parliamentary seat and the presidency of the ANC Women's League.
In late 2003, her close friend and socialite Hazel Crane was murdered. Crane previously offered to buy Madikizela-Mandela a house.

In July 2004, an appeal judge of the Pretoria High Court ruled that "the crimes were not committed for personal gain". The judge overturned the conviction for theft, but upheld the one for fraud, handing her a three years and six months suspended sentence.
In June 2007, the Canadian High Commission in South Africa declined to grant Winnie Mandela a visa to travel to Toronto, Canada, where she was scheduled to attend a gala fundraising concert organised by arts organization MusicaNoir, which included the world premiere of The Passion of Winnie, an opera based on her life.

When the ANC announced the election of its National Executive Committee on 21 December 2007, Mandela placed first with 2845 votes.

Mandela criticised the anti-immigrant violence in May–June 2008 that began in Johannesburg and spread throughout the country, and blamed the government's lack of suitable housing provisions for the sentiments behind the riots. She also apologized to the victims of the riots and visited the Alexandra township.
She also offered her home as a shelter for an immigrant family from the Democratic Republic of the Congo.She warned that the perpetrators of the violence could strike at the Gauteng train system.

In 1991, Winnie Mandela was convicted of kidnapping and being an accessory to assault but her six-year jail sentence was reduced to a fine and a two-year suspended sentence on appeal.

http://news.bbc.co.uk/onthisday/hi/dates/stories/may/14/newsid_2863000/2863807.stm
This incident became a cause célèbre for the apartheid government and opponents of the ANC, and Winnie Mandela's iconic status was dealt a heavy blow.
Appearing before the Truth and Reconciliation Commission in 1997, she said allegations that she was involved in at least 18 human rights abuses including eight murders were "ridiculous" and claimed that her main accuser, former comrade Katiza Cebekhulu, was a former "mental patient" and his allegations against her were "hallucinations".
http://www.sahistory.org.za/pages/chronology/thisday/1990-08-08.htm 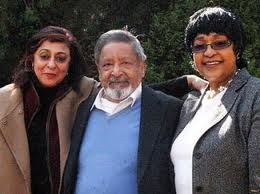 In 2010, Madikizela-Mandela was interviewed by Nadira Naipaul. In the interview, she attacked her ex-husband, claiming that he had "let blacks down", claiming that he was only "wheeled out to collect money", and that he is "nothing more than a foundation". She further attacked his decision to accept the Nobel Peace Prize with FW De Klerk. Among other things, she also claimed that Mandela was no longer "accessible" to her daughters. She referred to archbishop Desmond Tutu, in his capacity as the head of the Truth and Reconciliation commission as a "cretin".