What our Cop's Get up To On Duty

The Sowetan newspaper's Monday front page - which features a picture of two uniformed police officers caught on tape having sex - has been met with a strong reaction from the public. 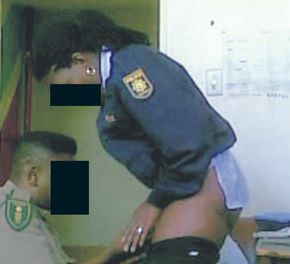 Working together we can.....
Sex on the Job
Posted by Jazzie at 8:47 PM No comments: Links to this post

Email ThisBlogThis!Share to TwitterShare to FacebookShare to Pinterest
Labels: A Disaster of a Country, Crooked Police

President Jacob Zuma is a misunderstood president, his spokesperson Mac Maharaj told the BBC in an interview broadcast on Monday.

"He hasn't been through a formal education so his power is as a self-educated man. His cultural roots are different. And to understand him in the context of SA is a bit of a problem, Maharaj added.

He went on to say that there was "an issue in SA" around understanding the president.

"He doesn't fit the normal mould of a president of a country... It's very important for the public to understand how he thinks, where he comes from, to understand the positions he takes and the way he manages issues."

Maharaj added that Zuma was "a tremendous communicator at grass-root levels and informally, but he's not that powerful at formal occasions".

It was a "challenge" that Zuma had taken over at a time when SA's transition to the building of democracy was at its most complex stage.

Asked why the president appeared to be silent on corruption, Maharaj said: "Corruption in SA is a major problem and it has to be tackled, not just issue by issue but systemically."
He added that there was a danger if corruption became embedded in a state.

"There's corruption all over, in Britain, in the US, but when it becomes systemic then that is a problem.

Asked what Zuma planned to do about the ANCYL's treatment of Botswana, Maharaj denied that the president was procrastinating.
"You'll be surprised how it [the ANCYL] needs to be attended to - it doesn't just require a rap on the knuckles."
Maharaj said the treatment of the ANCYL required that the ANC discipline the league and "educate" its members.

He added that financial probity was necessary for anyone wanting to be a leader as that person would be "a servant of the people".

On the weekend, Zuma - in an interview with City Press - criticised ANCYL president Julius Malema for making statements calling for a change of government in neighbouring Botswana.

At almost the same time, the ANCYL issued an apology and withdrew the statement of its national executive committee, which committed to the establishment of a Botswana Command Team to bring about regime change.

Posted by Jazzie at 5:03 PM No comments: Links to this post

Email ThisBlogThis!Share to TwitterShare to FacebookShare to Pinterest
Labels: A Disaster of a Country, Jacob Zuma, Our Governmunt

Striking municipal workers in Cape Town greeted Deputy Mayor Ian Neilson with anger and shouts of “18%” when he emerged from the city’s civic centre to accept their memorandum for higher wages on Monday.

Riot police officers stood guard outside the civic centre, with barbed wire surrounding much of the front part of the building.
About 3 300 South African Municipal Workers’ Union members went striking through Cape Town’s CBD as part of national strike action over wages.

The workers are demanding an 18% or R2 000 pay hike while the South African Local Government Association (Salga) is offering 6%.

In Cape Town, strikers turned out garbage bins, kicking litter across the street while shouting “phansi 6%, phansi”. Many were drinking beer while marijuana could also be smelled in the air.
The workers were hoping that Cape Town Mayor Patricia de Lille would come to speak to them and didn’t hold back their anger when her deputy greeted them. 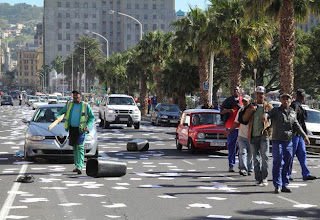 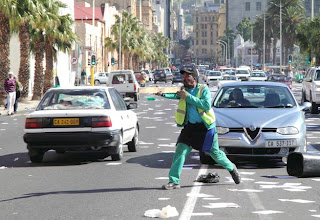 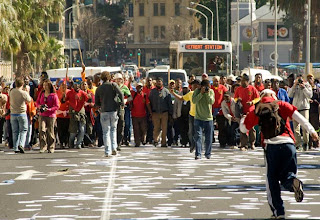 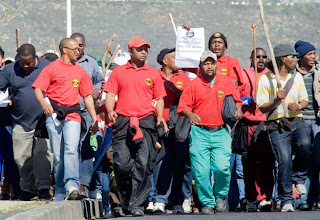 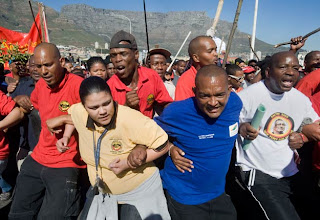 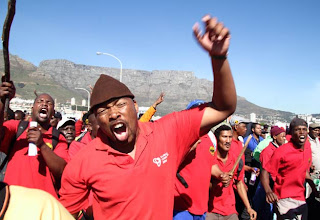 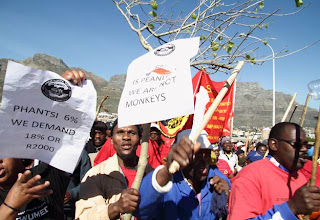 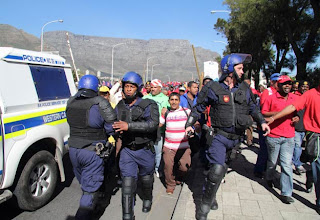 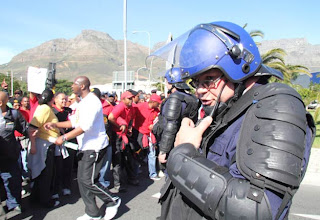 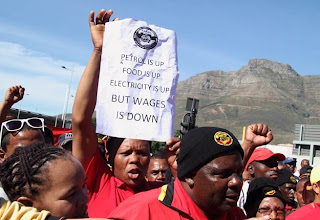 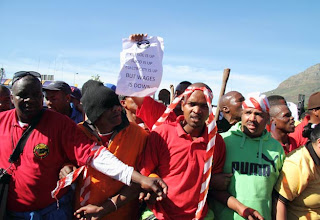 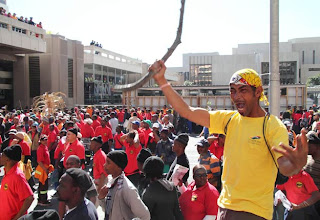 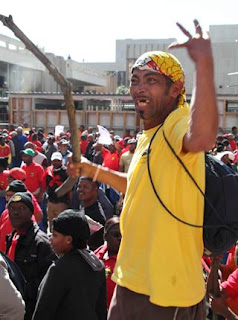 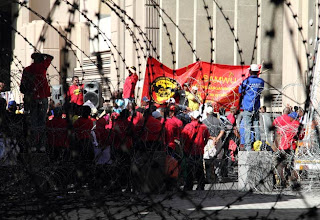 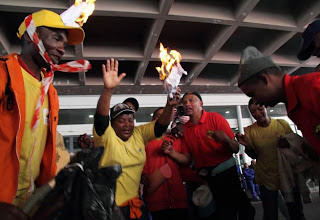 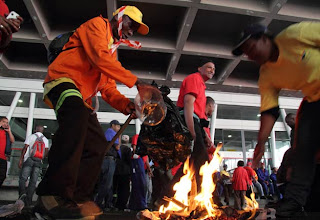 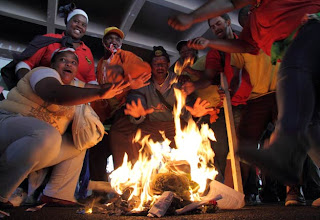 Wearing a suit and tie, Neilson was heavily guarded by riot officers armed with shields and emerged from behind a police casper parked in front of the civic centre. He tried to put on a brave face when workers shouted “voetsek” and other expletives at him.

After listening to a list of demands read out by Samwu’s Andre Adams, Neilson responded by saying that “I will take your memorandum back to the mayor and mayoral committee”.

“We accept your right to strike and ask that you honour the conditions of [the] strike.

“I don’t believe all the information [in the memorandum] is accurate.

“[We] must start with correct, accurate information.”

The deputy mayor ended his speech by telling workers to “enjoy the rest of your day”, to which they responded with “voetsek” and a reference to female genitalia.

Many of the strikers say that their current salary is making it difficult for them to be granted loans from banks, and as a result thereof, can’t qualify to buy houses because their salary is simply too low.

Renier Martin from Fisantekraal says he has been employed permanently by the City of Cape Town since December 2009 and is earning a monthly salary of R4 350.

Martin says what he wants is a 100% increase, but he knows this will not happen so he is willing to settle for a R2 000 hike.

“Some of us who received permanent contracts from 2009 are still owed nine months worth of backpay,” said Martin, adding that he would not be surprised if they did not get the backpay owed to them.

He says that there is currently a court case underway, regarding the outstanding backpay.

Mzukiseni Mdodasi from Du Noon says he is currently earning R5 700 and he would be delighted by the R2 000 increase, because he has dreams of buying a house but does not qualify for a bank loan to do so.

He says that his transport alone costs him about R250 a week.

Adams said that the strike would continue on Tuesday.


http://www.news24.com/SouthAfrica/News/Strikers-blast-Cape-Towns-deputy-mayor-20110815
Posted by Jazzie at 4:37 PM No comments: Links to this post

Email ThisBlogThis!Share to TwitterShare to FacebookShare to Pinterest
Labels: A Disaster of a Country, ANC, Strikes and Non Delivery

The racial tension in this country of ours is driving me crazy. If it is not the idiot youth league leader hurling racial slurs it’s the Archbishop!

I have a message for these people.

It shocked me to see the racial statement you made. I always had respect for you but you disappointed and angered me by abusing your position as a religious leader to publicly promote racism in South Africa. Your true colours came out and you have lost the respect of many. You should rather be concerned with religion and leave politics to the politicians. You are a walking contradiction and I pity you!

I have so much to say to you but will keep it short, simple and sweet so that you can understand it clearly.

You are a power hungry, uneducated, racist man. You are abusing your position as Youth League leader (at the expense of the youth) to enrich yourself and create racial polarisation in South Africa. How does it feel to be the most hated man in South Africa? One of these days all your bad deeds will catch up with you and I will personally hand you a jar of Vaseline on the day of your sentencing!

To the rest of you whitey haters,

If an African is born in America he becomes a legal citizen of the USA and is known as an African-American. Correct?

I was born in South Africa and so was 10 generations of my family. That makes me a legal citizen of South Africa - a European African!

I am a proud South African and love my country but the current political climate makes it hard for me not to imagine the worst.

Have you ever thought how the average white person feels about living in South Africa at this moment? They are bombarded with public racial statements against them from all sides, disadvantaged with BEE and Affirmative action and blamed for something that ended 17 years ago.

Not all whites supported the apartheid government and most of us are not and have never been racist!

Most whites (including myself) have nowhere else to go. It is extremely expensive to move to another country and most of us cannot afford it.

Even if I could I would never leave my home! Just like most of the other white South Africans I will have no choice but to stay and fight for my rights!

Posted by Jazzie at 9:30 AM No comments: Links to this post

Email ThisBlogThis!Share to TwitterShare to FacebookShare to Pinterest
Labels: A Disaster of a Country

You know you are in South Africa when...

You know you are in South Africa when:

- Countries like Cuba and Venezuela are admired as roll models.

- Jobs are left vacant rather than appointing qualified applicants from the "wrong" ethnic groups.

- Senior officials and cabinet ministers who fail are redeployed or rewarded with jobs as ambassadors.

- R2.4bn is loaned to a corrupt and failed neighbouring country while millions of jobless poor live in squatter camps.

- Less than 10% of the population is constantly blamed for lack of success by the majority.

- The president listens passively while his top youth leader labels whites as thieves.

- People protest violently against corruption and maladministration in the government but still vote for it.

- The media is labelled as unpatriotic for reporting government corruption and failure.

- A university lecturer lies about his qualifications but retains his position with full support from Council.

- A Youth leader expresses his intention to create a regime change in a stable neighbouring country.

- Politicians have a say in the selection of sport teams.

- The president, husband of several wives and father of many children, also has a fiancé.

- you have the leader of a Youth League who is almost middle aged not a youth, but has the intelect of a village idiot.

-obtaining a real, absolutely not false, truly genuine, not fake at all, valid for all classes of vehicles, non-expiring drivers license is as easy as withdrawing R500 from an automated bankteller.

-the ease of obtaining a university degree is relative to the amount of cash contained in an unmarked envelope.

you are issued with a Cuban dictionary and phrase book when admitted to a South African government hospital.

-tax is levied on the waters falling from heaven on a piece of farmland ( in other countries known as rain ).

-you notice a bumper sticker stating “Have you been hugged by a mugger today ?”.

-when the “tarred” part of the words “tarred national roads between towns/cities” on any map, refer to the history of the road and not its present condition.

-special mud splash pools are provided in the suburbs to parking lot pampered 4x4’s for that rugged country look.

-mugging overtakes soccer as the most popular national sport.

-the time elapsed in a public parking bay does not necessarily correspond to the return of the owner of the vehicle, but whether the vehicle could be ‘hotwired’ or not.


All the "TRIMMINGS" of a BANANA REPUBLIC!!!

Now shall we all rise and sing the National Anthem together?

Posted by Jazzie at 9:14 AM No comments: Links to this post

Email ThisBlogThis!Share to TwitterShare to FacebookShare to Pinterest
Labels: A Disaster of a Country, Our Governmunt
Newer Posts Older Posts Home
Subscribe to: Posts (Atom)