The National Assembly approved legislation on Tuesday empowering the police to arrest people who carry dangerous weapons in public.
The Dangerous Weapons Bill received the support of all parties in the House after a brief debate.
The bill was amended after it first came to the police portfolio committee for consideration last month.
Sporting bodies and collectors complained that they would be arrested while travelling to and from events, and could be prosecuted for having paintguns, airguns or antique rifles, guns, and swords in their possession.
As the bill now stands, it will not apply to:
* Possession of dangerous weapons in pursuit of any lawful employment, duty or activity;
* Possession of dangerous weapons during participation in any religious or cultural activities, or lawful sport, recreation, or entertainment; and;
* Legitimate collection, display, or exhibition of weapons.
Police officers (what a farking joke.........) will be given the discretion ( they are not even educated) to decide whether there is a reasonable suspicion that a weapon could be used for unlawful purposes.
Police will be able to crack down on protesters brandishing firearms, bricks, glass bottles, spears, or any object which could be used to harm someone or damage property.
Speaking in the committee last month, Police Minister Nathi Mthethwa said the bill would outlaw possession of any weapon, object, or replica in instances where there was an intention to use it for an unlawful purpose.
“The bill seeks to prohibit the carrying of firearms and objects which resemble firearms, dangerous weapons, and objects likely to cause injury or damage to property at a demonstration or gathering,” said Mthethwa.
He would be given the power to regulate what dangerous weapons could be carried in public.
“This is particularly important given the developments in the country, and the apparent brandishing of weapons in public protests and public gatherings, as it were.”
The use of toy guns to commit a crime was also covered under the proposed law.
“The rationale for this is that replica firearms often look exactly like real firearms, and can be used in the commission of a crime,” said Mthethwa.
“The bill also provides for the minister of police to issue notices of exclusion, where the carrying of what may be defined as dangerous weapons in public is excluded from being outlawed under specific circumstances.”
The bill now goes to the National Council of Provinces for concurrence.

That's it. We are Fucked

Email ThisBlogThis!Share to TwitterShare to FacebookShare to Pinterest
Labels: A Disaster of a Country, Crooked Police, Dysfunctional South Africa 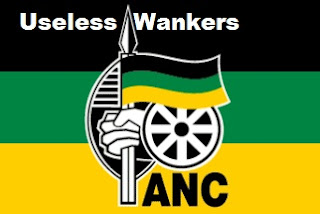 It is just unbelievable what these Marxist terrorist scum-bags have done with our once proud armed forces…and it is unimaginable what they are still going to do.

A week ago it has emerged that twelve of the 26 Swedish built Gripen fighter jets that we bought for the SAAF at a cost of R19 Billion have been mothballed…retired into “long term storage”.

According to defence minister Nosiviwe Mapisa-Nqakula, the Air Force does not have the funding to fly them.

But they have funding to build a palace for Zuma and his five wives. They have “funding” to piss up against the wall to the tune of R25 Billion as the Auditor General has just discovered. R25 Billion down the drain; wasted on unauthorised, irregular, fruitless and wasteful spending

At present the SAAF can only muster six qualified Gripen pilots who only have 150 flying hours available across the whole Gripen squadron this year.

In the Navy it is not going much better. The SA Navy is “deaf in one ear” after copper thieves made off with more than 5km of cable from the naval command centre at Silvermine in Cape Town. Navy base hit by cable thefts

WTF? Can’t they guard their own equipment? What happened to armed “swerwerwagte” or perimeter guards?

The installation is a radio base for the navy that also serves maritime patrol aircraft and foreign communications services and helps with search-and-rescue operations.

The SA Navy has two communication centres, one at Silvermine in the Cape and a standby station in Durban, KZN.

At Silvermine, the 51 antennas against the mountain are all out of action.

That effectively makes the SA Navy “deaf in one ear”.

I have my own thoughts about these “cable thefts”…Now you tell me if this is simple theft, or deliberate terrorist sabotage?

In my opinion, the ANC scum are just doing what they have always done: Sabotage and terrorise South Africa’s infrastructure and its people.

DA spokesman on defence David Maynier said, “The fact that copper thieves breached the naval command centre at Silvermine is a national - and international - embarrassment that may compromise maritime safety and national security”.

Not only that, mate…lives are at stake here. Thousands of ships pass our dangerous coast every year and many land in distress. These distressed sailors rely on these communications. Do you think the ANC cares? Like phuq they do!

http://mikesmithspoliticalcommentary.blogspot.com/2013/03/anc-clips-south-african-air-forces.html
Posted by Jazzie at 1:38 PM No comments: Links to this post

I am James Pieters, grew up in Hermanus South-Africa, a town that was discovered 100 years
ago by my fathers great grandfather. I grew up under an apartheid’s regime where we slept
with our windows open at night, we had no burglar bars or alarm systems in our homes. I never
saw any type of violence against any people white nor black in my home town and life was
peaceful for a little white boy who roamed the streets and mountains, smelled every leave and
flower on every tree he climbed to see what was on the other side.

My family was extremely poor and my father grew up being a labourer on another white mans farm
where they worked hard as family to get what they needed to survive. My folks worked for
survival and we never picked any fruits from apartheid, in fact my sister tells me of times we had
no food in our home. The roof of our home leakedand I had to move my bed to the middle of
the room when it rained as it dripped everywhere and water would stream down the side of
the walls as the stench of the soil under the wooden floors embarrassed me from time to time
when we had visitors. My parents could hardly ever pay school fees to the government school
I attended and I was made to stand up in class quite a few times asked why my parents have
not paid any school fees.

After apartheid ended we as a nation were promised a place in the rainbow nation. Some where
excited as the struggle was something of the past, the sanctions I new so little about came to an
end and there was talk about unity and a bright future. But the dreams faded as the little rope
around my peoples necks became tighter and tighter. Of course my people were made to
disarm first. Just a little law that was changed that made it such an effort to hold on to your legal
fire arm that most just decided to give it up, the war was none the less something of the past and
we were all part of Nelson Mandela’s rainbow nation now. Soon only the criminals had fire-arms
and the once effective police force was reduced to a incompetent joke. Slowly but surely we were
made to understand that there is little hope for us or our children to have a bright future in this
rainbow nation. Murder and rape in our once peaceful living areas became so common that it
became part of our every day lives.
Soon the murders, rape and torture of our woman and children became unbearable, but on
opening our mouths we were told by the ruling ANC party that “If we didn’t like it we should
leave”.

Today we are part of a country where we are looked down upon, everything that goes wrong,
every murder, rape, torture gets thrown back to “its the whites, because of what you did in
apartheid”. One of my biggest dreams were to own a piece of farm land, but that dream has been
stolen as the Robert Mugabe model of farm invasions seems to be the talk of our black government
almost on a daily basis. Where it is said that land grabs is at the order of the day. Being a farmer
has proven to be the most dangerous occupation in our rainbow nation as these passionate
people and their families get literally slaughtered like animals on a daily basis as the police, politicians
and press turns a blind eye. The very people that voted for change yesterday, today are the ones that are
paying the price, voiceless, discriminated against and have no hope for their children on what was
supposed to be our soil also.

I brought my son and daughter up to accept and treat with respect all individuals they share this planet
with. I taught them that we were all the same, no matter what color, that inside we all have a soul.
Sadly my children have had so many incidences of racism from the very people I taught them to
respect, even on teacher levels at school that they have grown into understanding that what they
experience out there is reality. When the President of your country sings and dance to a tune that
says, kill the boer kill the whiteman, the news papers read that some high ranking official said the
previous day that you are a not welcome in a country that is part of your own heritage, and when
indeed you read every morning of the young and old that died at the hands of the very race you
taught your children to respect, it indeed has become a sad day for reconciliation.

South-Africa, has sadly become a paradise for a people that believes that the world owes them
everything. A lazy multitude that expects everything to be placed in their laps. That hates the white
man so much that he is able to even at the plea of their victims would rape daughters in front of their
fathers, rape mothers in front of their sons, kill and wipe out a whole family and then walk away
justified that he is the victim just as his ruling ANC government had made him believe to be.
A people that hates everything about the white man, except his fancy luxury vehicles, life saving
medication, his Rolex watches and the riches that goes with it. A people that will quickly hold his
hands out in front of him to tell that its empty and that the white man ha responsibility towards
feeding Africa, but at the same time hates him with passion.

I hope and pray that your eyes will open to the atrocities that befalls my people.
We have tried and kept silent and cried all in vain. To end off my very own a personal slogan,
“I would rather lose my life to a civil war, than to see my people slowly and silently
murdered“!

May God bless you all, don’t make the same mistakes, learn from a nation in tears.

Read 2nd letter here
Posted by Jazzie at 12:29 PM No comments: Links to this post