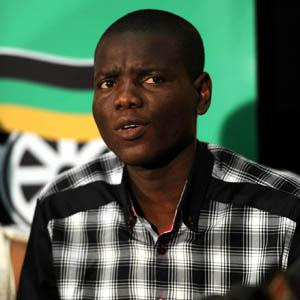 Let me introduce you to the ANCYL’s latest village idiot, the new Malema. His name is Ronald Lamola …and he is on the warpath.

Last night at the ANCYL meeting at the University of Cape Town, he said that the ANC should unapologetically pursue the changing of the constitution so that mines can be nationalized and white owned property expropriated.

He continued his rhetoric against “White monopoly capital” and said that it is in the interest of Whites to redistribute their prosperity...”

In a direct attack against the billionaire entrepreneurial family, the Ruperts, he added that, “…otherwise we cannot be held responsible if the farms of the Ruperts are invaded.”He said that, “The ANCYL leaders will not abandon the struggle for economic freedom”.
Economic freedom in Communist Newspeak means the day they have stolen everything from whites.

He said that: “White people who own land are holding the ANC government at ransom.”
He also said that: “Universities should be transformed to further the ANC agenda.”

What exactly that agenda is, he did not say.

He said that: “the only way blacks are going to become part of the economy is through the nationalization of the mines and the expropriation of white owned farms.”

He added that the ANCYL were always allowed to be “naughty”.

“We should be allowed to do things that adults normally won’t do”…
Die Burger report: Share your wealth or we will take it by force

Several things out of his speech struck me. First he admitted what we have always known and said right here on this blog, that the ANC has an “agenda”.

That agenda includes the economic dispossession of whites and driving them either into abject poverty or out of the country through the nationalization of mines and the stealing of white owned farms.

Apart from that, this idiot made himself guilty of the vilest hate speech against whites, threats of violence and theft of their property, intimidation and a declaration of war. Why is he still allowed to walk free? Should he not be in prison?

Nobody in the ANC condemned him, so I take it they approve of everything he said. Just like they always approved of everything Julias Malema said.

Like I said yesterday, nothing keeps blacks from taking part in the economy. In fact they have all the laws of BEE and AA on their side. After eighteen years there is nothing holding them back to start businesses and become prosperous.

But I suppose it is easier to sit on your arse and blame whites for all the evils of the ANC.

I have said it before and I will say it again. The ANC is spoiling for a race war. Almost daily they spew their hatred in the faces of White South Africans. Below are just a few examples of their hate speech and declarations of war against the whites of South Africa.

"When Mandela dies we will kill you whites like flies" - Mzukisi Gaba (ANC councilor and politician at the Provincial government of the Western Cape.)

“Stealing from whites is not a crime” – Faraday Nkoane, Leader of the Uhuru culture club.

“Kill them- Kill the Amaburu” - song by the ANC and Mandela

“We are here today to declare war. We are against violence, but if this is what it takes to force a bad farmer in a direction, then they should be smashed (moered) in that direction. If farmers continue to violate the rights of our workers like mad dogs then we need to beat them until they stop. They are going to shit if they do not stop.” - Tony Ehrenreich – Cosatu leader in the Western Cape.

“There is already blood on the farm workers and unless it stops there will be blood on the farmers of these farms. We will grab the land and give it to the rightful owners.” - Tony Ehrenreich – Cosatu leader in the Western Cape.

http://mikesmithspoliticalcommentary.blogspot.com/2012/05/anc-youth-league-acting-president-share.html
Posted by Jazzie at 12:00 PM 2 comments: Links to this post

Email ThisBlogThis!Share to TwitterShare to FacebookShare to Pinterest
Labels: A Disaster of a Country, Idiots of South Africa
Cost of Zuma’s wives, children nearly doubles

CAPE TOWN — The cost to the taxpayer of support for President Jacob Zuma ’s wives and children almost doubled in 2009-10, soaring to more than R15m from R8m a year before, according to figures released by the Presidency yesterday.
Speculation has been rife since Zuma came to power over the cost of his extended family, both during his term and once he has left office, and whether this would include children born from extramarital relations.

When Trollip asked what the expenses and benefits enjoyed by Zuma’s wives and children were, Chabane provided guidelines .

“Although the spouses have no constitutionally defined roles, obligations or responsibilities and as such are not remunerated by the state, they are, however, expected to provide support to the President in the execution of his duties, and specifically at state and official functions. In addition, the spouses may fulfil other official functions in support, and in the interest, of the Republic.

“The state provides all reasonable administrative, logistical and other support to the spouses to enable them to meet these responsibilities in a manner that permits them actively to pursue their own careers and interests if they so desire. The state also may provide reasonable logistical support to the spouses to assist with the day-to-day logistical arrangements of dependent school- going children in the household,” Chabane said.

He said that staff were allocated to spouses and these included a private secretary and a researcher. Administrative requirements were also met.

Chabane said: “Expenses covered for spouses by the Presidency therefore include the following: personal support staff — secretary and researcher; domestic air travel and accommodation and international air travel and accommodation for official visits abroad approved by the President; cellular phones for spouses and their secretaries; equipment such as laptops and printers; and special daily allowances for incidental expenses during official journeys.”

“The dependent children of the President may collectively utilise up to 60 single domestic economy class flights per annum to visit and reunite with their parents within the country at the cost of the Presidency. This figure is regardless of the total number of qualifying children. Travel costs beyond the allotted tickets are to be borne by the President.”

If a child minder has to accompany a child younger than eight, then the tickets come from the allocated 60.

Chabane said the policy applied to all the president’s children regardless of whether he was married to the mother.


http://www.businessday.co.za/articles/Content.aspx?id=103788
Posted by Jazzie at 11:46 AM No comments: Links to this post

Email ThisBlogThis!Share to TwitterShare to FacebookShare to Pinterest
Labels: A Disaster of a Country, Dysfunctional South Africa, Jacob Zuma

Yes that's what happens folks!
Posted by Jazzie at 11:44 AM No comments: Links to this post

Email ThisBlogThis!Share to TwitterShare to FacebookShare to Pinterest
Labels: A Disaster of a Country, Crime in South Africa, Crooked Police 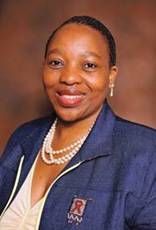 
KwaZulu-Natal MEC for co-operative governance and traditional affairs Nomsa Dube called on the national department of science and technology to investigate the causes of lightning after seven people died in lightning strikes.

"We will do an investigation and talk to the department of science and technology on what is the cause of the lightning, and if it only happened to the previously disadvantaged as I have never seen any white people being struck by lightning." said Dube.


She was visiting Mpumazi in Eshowe where seven people from two families died after being struck by lightning on Sunday. "Scientists from the department could perhaps help us and come up with instruments that could help community members protect themselves against lightning. "The department has dealt with floods and fires, but lightning was new to us," said Dube.


Our country is clearly in excellent hands
Posted by Jazzie at 11:43 AM 38 comments: Links to this post