And the cost of the fines - as a business expense in the generation of income - will be passed on to the client.

Assistant chief Nathan Ladegourdie said spot fines were issued to sex workers and new sex workers were profiled in Sea Point, Green Point, Cape Town and Wynberg in an operation over the weekend.


The unit helped two women - one a minor - who had been forced into the industry by foreign nationals by taking them to places of safety, Ladegourdie said.
In Wynberg, a sex worker was arrested for being in possession of three units of tik, he said.
http://www.news24.com/SouthAfrica/News/Cape-Town-vice-squad-fines-sex-workers-20110523
Posted by Jazzie at 7:55 PM No comments: Links to this post

2011-05-23
Only in Africa! You voted for this party, and now we're unhappy with your representatives!
First you vote for them , then you protest--- heaven help us!!!!!!
May the Anc reap the full effects of the seeds of destruction they have and continue to plant. The people are wising up to the lies and deceit. Mass protests are surely only a matter of time.
Already...Hahahahaha!!!!!....you stupid bunch of ANC clowns!!!!...your days are so numbered!!
Like a bunch of chimps swinging in the trees and screaming.
Except the chimps are intelligent
O we are so doomed! You asked for them! Now sharrap and sit in your shack without water, electricity and cabriolet toilets!
You asked for it, you got it. now shut up
Durban - Sixteen people were arrested for alleged public violence during an ANC protest against newly-elected councillors in Bizana on Monday, Eastern Cape police said.
"About 50 00 people blocked the municipal office and the department of education. They also forced people out of the shops to join the toyi-toyi," spokesperson Lieutenant Colonel Sibongile Soci said. 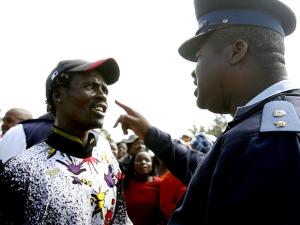 African National Congress members were apparently unhappy with the ward councillors elected for the area during local government elections.
Soci said people were ferried in to the area to take part in the protest.
"The group has since dispersed, but the situation is still tense. Police are monitoring the area as there are fears they might re-group again."
Bizana is the seat of Mbizana local municipality, which is made up of 25 wards.
It was transferred from the OR Tambo district to the Alfred Nzo district municipality following local elections. The ANC won 73.2% of the vote in the province.
http://www.news24.com/SouthAfrica/News/16-arrested-at-ANC-protest-20110523
Posted by Jazzie at 7:36 PM 1 comment: Links to this post

ANC Duped Us To Get Votes

They allege that ANC ward councillors encouraged them to invade municipal land in return for votes...... 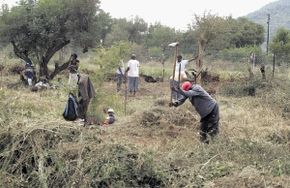 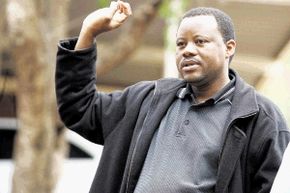 ANGRY residents of Regorogile township outside Thabazimbi, Limpopo, say they have been duped by the ruling party who used them to garner votes.

They allege that in the run-up to the local government elections ANC ward councillors encouraged them to invade municipal land in return for votes.
Some of the residents erected shacks and have vowed that they are "not going anywhere".
Last Thursday, a day after the ANC had retained the Thabazimbi local municipality, residents claimed the municipality officials came out and warned them not to invade the land.
Residents said the ANC councillors had informed them that after they had invaded the land, the municipality would build them RDP houses with basic services.
"I have been on the housing waiting list for three years. Two weeks ago, when the ANC ward councillors informed us at a meeting that we could invade municipal land, I jumped at that opportunity," Joseph Moleya said.
Municipal spokesperson Joshua Motsomane on Friday denied that their ward councillors had urged residents to occupy land.
Another resident, Edwin Tshimenza, said he was surprised by the municipality's response.
"It is a lie that they did not know. We can identify all the people who told us to invade the land.
"Now that we have voted for them they are turning their backs on us," he said.
Many residents, including Naomi Mataboge, said they were not prepared to vacate the land.
While the municipality was locked in a meeting with their leadership, some residents were erecting shacks and others were cutting down trees on what they said were their stands.
Motsomane said the residents' actions were illegal and threatened to take legal action against them.
"That land they are occupying is reserved by the municipality. We can't allow people to occupy land that is not serviced," Motsomane said.
"And if their allegations are true that they had been given permission by our own councillors, we are going to act on such allegations."
http://www.sowetanlive.co.za/news/2011/05/23/anc-duped-us-to-get-votes-say-residents
Posted by Jazzie at 7:16 PM No comments: Links to this post 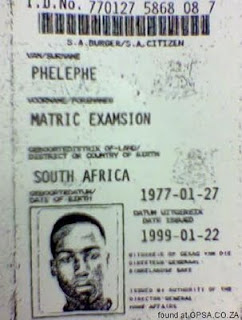 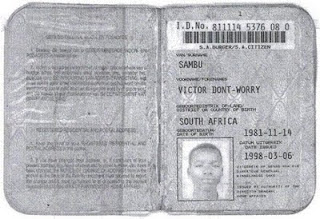 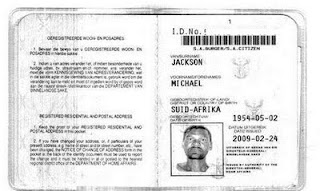 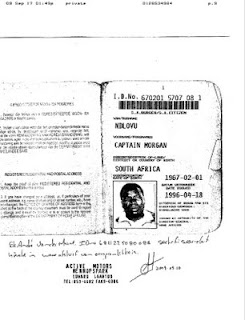 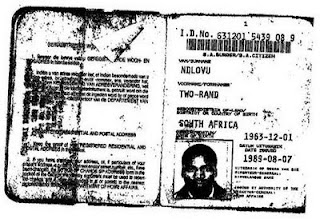 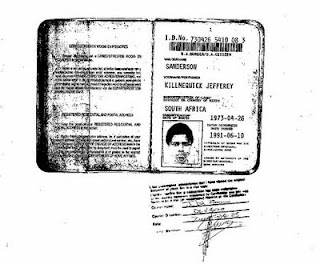 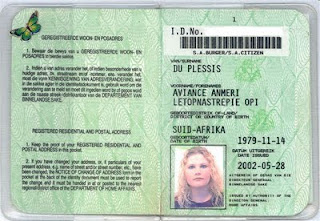 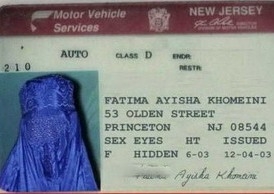 CAN YOU IMAGINE IF ALL THE WOMEN OF THE NEW SOUTH AFRICAN HAD TO WEAR THESE???
Posted by Jazzie at 6:54 PM No comments: Links to this post 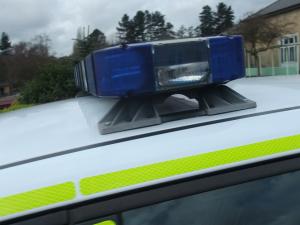 The transfer of nearly a third of the 1 200-strong Durban metro police from the CBD to outlying areas, to address performance problems, has been put on ice for a week.
The decision to halt the transfers comes after the affected officers lodged complaints with metro police head Eugene Nzama, after learning that they would be moved.
A performance assessment initiated by Nzama several months ago revealed not only “low productivity, but also gross inefficiency in policing”.
Nzama said that the officers’ inefficiency had “greatly contributed” to the non-compliance of by-laws in the municipal region by private and business motorists, the business community, informal traders and pedestrians. He also noted that “unacceptable behaviour” from motorists had increased.
According to metro police officials, the transfers were intended to inculcate a sense of responsibility and to “groom” officers to an acceptable level of performance. The performance evaluation would be revisited quarterly to analyse work performance and identify improvements in productivity, and to assess the need to move officers to the next stage of helping them improve their performance.
The first time 400 officers learnt that they would have to report for duty elsewhere on Monday was when they saw their names on notice boards at metro police offices last week.
However, the unions cried foul, claiming the transfers were flawed, done without consulting the affected staff and in contravention of the eThekwini municipality’s transfer policy.
On Sunday, metro police spokesman Eugene Msomi said the transfers had been put on hold for a week, until Nzama, who was away on metro police business, returned to his office.
“We received a lot of grievances of a personal nature and, because they were all related to the transfers, we decided to wait until Nzama returns on Monday (May 30). He needs to look into the complaints and make a decision,” said Msomi.
Independent Municipal and Allied Trade Union acting regional manager Nelia van Wyk said she had been told by the affected officers that the transfers had been put on hold. “We haven’t been told anything official by the metro police, but we have been advised by our members that the transfers have been put on hold. We will look into the issue this week,” she said.
SA Municipal Workers’ Union (Samwu) branch secretary Nhlanhla Nyandeni said the union was “happy” that the transfers had been postponed, saying that proper consultation between the unions and metro police authorities was needed before a decision could be made.

http://www.iol.co.za/news/south-africa/kwazulu-natal/police-transfer-on-hold-1.1072383
Posted by Jazzie at 6:33 PM No comments: Links to this post 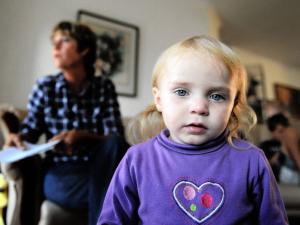 For Pretoria mother Annemie Olivier the night of October 4 will be etched in her mind forever.
For the past eight months Olivier has been waiting for news on how her daughter, Ané Smit, 22, a heroin addict, was able to hang herself in the cells of the Pretoria North Magistrate’s Court.
Court cells should be monitored and detainees are not meant to have anything on them in the cells with which they could hang themselves, such as shoelaces, long-sleeved tops, belts or ties.
Smit apparently used a pyjama top.
Her mother blames her death on police negligence. When Smit was arrested on an apparent theft charge she was not wearing pyjamas, her mother says. 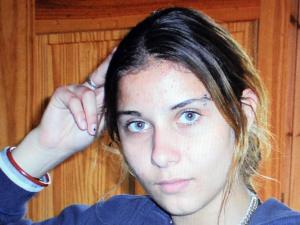 Adding to the Olivier family’s heartache is that it appears that the police investigation into her daughter’s death has hit a stop, with police saying they are awaiting the post-mortem results.
Police spokesman Warrant Officer Mathews Nkoadi said the case was under investigation and the post-mortem results pending.
He was unable to say when the post-mortem results would be known or why, eight months later, police did not yet have them.
This is despite Moses Dlamini, spokesman for the Independent Complaints Directorate (ICD), which investigates all deaths in police custody, having said that the doctor who performed the post-mortem had concluded “the death is consistent with hanging and no indications were found that suggested foul play”.
An angry Olivier said she just wanted answers. “How do I explain this to her daughter?
“How do I tell her that I don’t know how her mother was able to kill herself when she should not have been able to? “How do I tell her that the police and the court officials should have been looking after her, but didn’t?
“Now the people investigating don’t seem to care. What kind of thing is that to tell a young girl?”
Fighting back tears as Smit’s two-year-old daughter, Johané, pointed to a picture of her mother on her funeral programme and said “Mama”, Olivier said all she wanted were answers.
“I just want to know what happened. I just want to know how she could kill herself when she was meant to be watched.
“I have asked to see the police photos of Ané and her post-mortem report, but the police refuse. What are they hiding? Why are they not showing me these things?
“If no crime was committed and they have done nothing wrong, why not show me the reports?”
Olivier said that she contacted the court to find out what had happened in the case.
“When I phoned the chief magistrate, he told me he had sent her to prison for six months.
“When I made enquiries with the prosecutor about where my daughter was and when I could see her, he said he didn’t know she had been sent to jail.
“The next thing (there) was a policeman at my door telling me my daughter was dead.
“I went to the investigating officer and he told me he couldn’t help me because he didn’t have the docket with him.
“He said the docket was at his house because he was afraid it would get stolen.
“Since when do investigating officers take suicide dockets home? Since when do people steal suicide dockets?
“I don’t doubt that Ané committed suicide.
“I just want answers about how she could kill herself when the police should have been looking after her.
“To them she is just another dead person in a cell, just another number, but to me she is not. She is my daughter. I want answers so we can get on with our lives.”
Dlamini said Smit was alone in the court holding cell.
“The scene was visited by the ICD’s Gauteng provincial office… The cause of death was indicated as being consistent with hanging.
“This case is closed as there is no police involvement in this matter. The inquest case is under investigation by the SAPS.”
Dlamini said Olivier had not been shown “scene photos” as police had yet to finalise the investigation.
http://www.iol.co.za/news/crime-courts/riddle-of-addict-found-dead-in-cell-1.1072543
Posted by Jazzie at 5:10 PM No comments: Links to this post