The Passing of the Great Madiba

The passing of the Great Madiba by Cuan Elgin

It is said to be disrespectful to speak ill of the dead; the presumption being that they are no longer around to defend themselves.

What then does one say of a person who was around for 95 years to defend himself against accusations of being a cunning & deceitful terrorist, responsible for the violent deaths of many innocent South African civilians, both black & white, but yet never did defend himself against these charges in court, pleading guilty thereto, and later even admitting to approving of more terrorist bombings of civilians? He never did renounce violence as a legitimate tool for the overthrow of the state, or apologized to the families of the victims, nor showed any remorse after his early release from a life-sentence in jail.

It is easy to go along with the madding crowd, and eulogize the man, painting him as a glorious freedom fighter, a statesman, a champion of non-racial democracy, a humanitarian, and one of the greatest figures of the age. The fact that he is often depicted as "Africa's Che Guevara" in comparing him to a man who was a sadistic murderer, and who had a very low opinion of African revolutionaries, makes one wonder if those who so admired him, did so through ignorance, or that they hold that "the end justifies the means" in gaining power through violent revolt, or the threat thereof. Some even compared him to Jesus Christ.

It is much harder and less popular to take the other, dissenting view: that he was an unrepentant murderer who brought communism, a sense of entitlement, abortion, pornography, lawlessness and amongst the highest murder, robbery & rape incidence in the world, to South Africa; a formerly conservative, largely law-abiding & orderly country which is, according to many, now unsafe for honest & decent people, and more divided than ever.

For sure, he was a canny showman, a man with the common touch, and he had a sense of occasion. But was he really much more? Some say he was purely an invention of the Liberal Left media and the international communist movement. His biography, his speeches and his widely published sage "sayings" were, by and large, written for him, or merely adaptions of the sayings of other, more original thinkers.

Yet, despite his close friendship with many non-democratic despots, and his thus disingenuous criticism of democratically elected Western leaders, he was feted in the capitals of the world, with receptions befitting an emperor, and will, whether the dissenters like it or not, be an icon of the age, for many years to come. 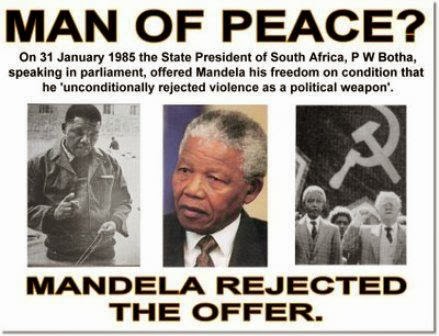 NOT ONCE did Mandela stand up and say that he was sorry for all the people murdered on his command by his private revolutionary army, Umkhonto we Sizwe ("Spear of the Nation", abbreviated MK).

Not once did he ask for forgiveness from the families of his bombing victims.

Not once did he say he was sorry.

No. That would take a big man - a true reformed man of peace - not a coward.

Instead he held all of his Communist principles dear to his heart while the World held him up as a father figure. A man of peace. A champion of human rights.

A champion of human rights?

Where were the human rights of his bombing victims? The innocent men, women and children of all races which he blew up?

Yes, a true champion of human rights - even though he spent his time as SA president cavorting with some of the biggest human rights abusers and dictators in the world.

Sure, sure, he was concerned with human rights, just not the human rights of the people who happened to live in the countries of his dictator friends.

A man of two faces?

Yes, sure if you say so. The problem with that theory is that he never had two faces - only the ones people wanted to see. Mandela never hid who he was. He flaunted it in the face of the world for all to see. The world chose to see the "good" and ignore the bad.

But, but, they say, Mandela was the reason South Africa didn't descend into chaos after the ANC took over.

The reason the country didn't descend into chaos was that the Whites still believed the bill of goods F-wit de Klerk had sold them. They were assured that the ANC would govern for all and that they had nothing to fear. They were placated into a coma by their Churches who told them that handing the country over to the ANC was the right thing to do.

And once the ANC were handed the country on a silver platter, they quickly purged the once feared military of Whites and replaced them with MK operatives. Guns were removed from the general population as Mandela and the ANC knew they needed the White population unarmed and unable to fight back.

And once Whites awoke from their kumbaya coma, it was all too late. The fight had gone, and anger has now replaced the hurt when they realised that F-wit de Klerk had never secured a homeland for the White people of South Africa when he handed the country over - especially for the Afrikaners. A homeland away from the marauding Black hordes - a homeland similar to what Lesotho and Swaziland enjoy within South Africa's borders.

Now it's too late.

Today the Whites are money-making puppet slaves for the ANC, living in continual fear of their Black masters. Too scared to put a foot wrong. Too scared to leave the security of their homes.

Of course there's a lot more to what I've written here. So much more to tell. This isn't the entire story. Yes Apartheid would have ultimately failed, but we as a country should have been left to solve the issue, not have been pressured to hand the
country over to a group of clueless murdering Communist idiots. 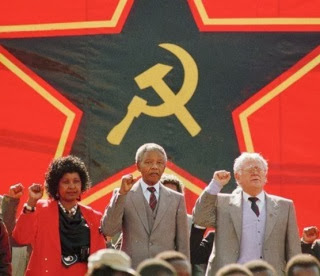 There he is, standing proudly under the hammer and sickle, with Jewish Marxist Joe Slovo, and his inconvenient ex-wife Winnie "Bring-Me-A-Tyre-Petrol-And-My-Matches" Mandela.


Posted by Jazzie at 4:21 PM No comments: Links to this post

The Devil and The Saint

Since this tired old canard keeps cropping up to hit white South Africans over the nose like a rolled up newspaper, I thought it perhaps time to separate fact from fiction once and for all. Let those who object say so now or forever hold their peace. While we're at it, let's put apartheid as a system into perspective.

Do we know how many blacks were killed under apartheid?

We do, and the source is none other than the Human Right Commission submitted as evidence to the TRC in 1997.

That means the number killed from 1990 to 1994 which is AFTER the unbanning of the ANC and for all intents and purposes apartheid had ended is a whopping 14 000, involving mostly black on black violence between the ANC and the IFP and various other factions! Not whitey's fault.

Of the 14 000 killed during those 4 years, 92% of deaths were caused by blacks killing blacks. Only 5.6% were attributed to the Security Forces at the time and usually in retaliation to attacks initiated by the ANC/UDF that had been unbanned. Remember Ciskei? The difference in % is due to unknown causes.

What this means is that during the apartheid reign of 41 years, 7 000 blacks died compared to double the amount of dead in just 4 years! Let me break it down yet further, 170 blacks were killed as a result of apartheid ANNUALLY. That's 170 people per year! That's the HRC figures people! Sounds like an insignificant number now doesn't it?

More blacks then were killed under De Klerk's 'new' anti-apartheid government of 4 years than in 41 years of government under full blown apartheid! How good was the propaganda of the anti-apartheid movement eh?!

The list of far worse political systems is quite extensive and apartheid wouldn't even feature. But such was the venom against it that the result is a country destroyed. Apartheid was far from the monster it continues to be portrayed. I agree though that it was unjustifiable and unsustainable and just plain wrong and given a do-over, whites would rather leave blacks to find their way than provide jobs and healthcare and other services which caused their population to balloon from 500 000 when Van Riebeeck landed to the almost 40 million in 1994... Facts people, inconvenient little things that keep getting in the way.

https://www.facebook.com/SouthAfrica1994
Posted by Jazzie at 4:06 PM No comments: Links to this post

In his book, ”Long Walk to Freedom”, Peace Laurette, Mandela writes that as a leading member of the ANC’s executive committee, he had “personally signed off” in approving these acts of terrorism :


Our “hero” consistently refused to renounce violence even after he was released.
Posted by Jazzie at 3:56 PM No comments: Links to this post

Mandela in Morocco 1962 (2nd row, middle). He was there to do military training.
Posted by Jazzie at 3:50 PM No comments: Links to this post

I am somewhat disgusted by the sycophantic outpouring if grief for the death of Nelson Mandela in the media. They automatically assume that we are all grief stricken.

I am not. Mandela was a man of violence, who if he didn't carry out the attacks himself, planned, organised and ordered bombing attacks on bus stations that left young white school children dead and maimed. Not once did he renounce violence, not once did he expressed sorrow for his victims.

If Mandela had improved the lives of Black South Africans, I would respect him for that, but he didn't. Health, welfare, education and life expectancy for the African poor in South Africa is worsening by the week. South Africa, once a law abiding country is now plagued by crime, murder and rape, the worst in the world.

I respect and admire Gandhi who a man of peace, understanding and reconciliation. He rejected the use of violence throughout his long life. I respect and admire Martin Luther King, who forced the United States to look inward and examine it's conscience and treatment of citizens based on the colour of their skins. I admire Mohammed Ali for his stand against the draft, his intelligence and inherent gentleness.


I admire every Black teacher, nurse and doctor who sets out every day to improve the lives of those in their care. I admire every Black police officer, firefighter and serviceman or woman who puts on the uniform to serve, protect and defend their fellow citizen. I admire every decent hardworking African person wherever they are who works hard, studies diligently and achieves through personal effort.

I do not and will admire or respect Mandela, a convicted terrorist no different to Gerry Adams, Martin McGuiness or any other man of violence determined to impose their view on others.

Yesterday, I attracted a great deal of criticism for my views on Nelson Mandela. I cannot change or apologise for my opinions. Mandela planned and ordered bomb attacks which killed and maimed innocent people. He ordered attacks on bus stations aimed at killing white children and women.

In later life, although he said a great many good things, he neither renounced the use of violence nor publically condemned either MBeki of Zuma for the increasing violence against Whites.

Two wrongs do not make a right.

A far better man was the Rev Martin Luther King who, in his 'I have a dream speech', spoke for the whole world.

No-one must be judged on the colour of their skin. I am afraid, even in his old age, Mandela still did.

Posted by Jazzie at 3:14 PM No comments: Links to this post

Posted by Jazzie at 3:11 PM No comments: Links to this post